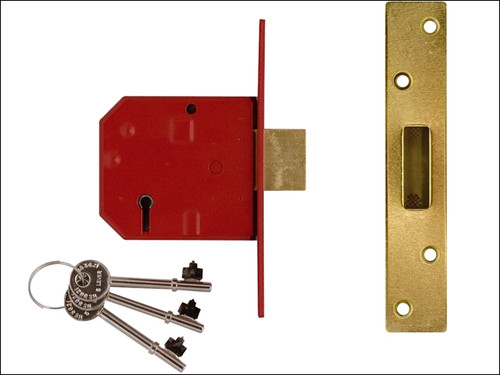 The Union 2134E British Standard 5 lever mortice deadlocks are ideal for external timber doors hinged on the left or right with the keys being suitable for doors up to 54mm thick. The deadbolt is locked or unlocked by the key from either side, and a 20mm deadbolt for secure positive deadlocking and additional resistance against attack.

2134E features an anti-pick, anti-saw and anti-drill security, Chamfered bolt design that increases the performance of the lock under side load testing. The chamfer of the bolt also makes drilling attack more difficult, Supplied with covered escutcheon to match forend.

The 2134E series locks are recommended by insurance companies, kitemarked to BS3621: 2007(British Standard) and has been approved by the police Secured by Design initiative. They are also covered by a 15 Year guarantee.

A deadlock has a single deadbolt which is locked or unlocked and locked by means of a key from either side, whereas, a sashlock has both a deadbolt and a latch which is operated from either side by a lever handles.

The security level of mortice deadlocks or sashlocks ranges from 2-5 levers. The higher the number of levers the more secure the lock is.

Backset: 45mm This is the measurement from the edge of the door to the centre of the keyhole.